Let’s start with two facts most vividly describing the pedal effect from Boss – CE-2W. Fact number one: Boss CE-2W is considered to be “Mercedes” of the guitar pedal world. Fact number two: it’s chorus pedal effect. Another pinch of information for buyers. It’s the world’s first chorus pedal and the first guitar pedal from BOSS. Basically, these facts are enough to go to the store right now to buy the Boss CE-2W. For curious musicians, we will tell more about this pedal. 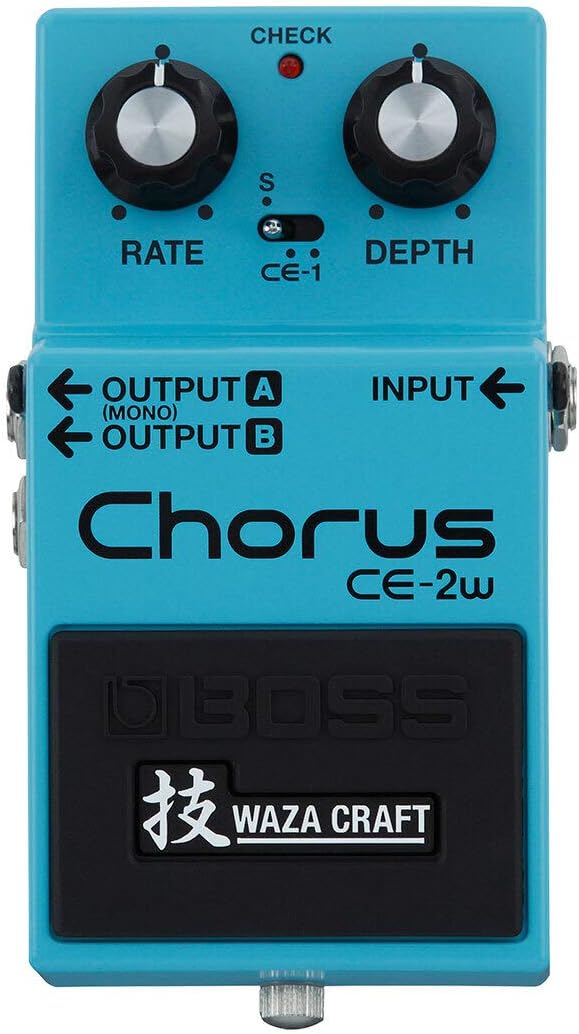 What does chorus do?

Before proceeding  to describe all advantages and disadvantages of the Boss CE-2W guitar pedal, let’s understand what the chorus effect do. Because the pedal was created exactly for chorus effect .

The chorus effect its foundation is proposed to make the sound of one instrument sound like several instruments at once. The main idea of chorus is the “instrument propagation” effect, giving the impression of ensemble sound, and in the case of singing – choral singing. It is implemented by copying the signal with a slight time shift, possibly into different stereo channels to add volume to the sound. The principle of this effect is a small signal delay – usually 10-30 milliseconds (ms).

When the delayed signal is then mixed with the main signal, the effect is similar to the several simultaneous sounding instruments or voices. Some devices also slightly shift the pitch for a more dramatic effect. Chorus is ubiquitous in guitar and rock music. It can be heard in thousands of songs. In particular, in “Roxanne” track from “Police” band the excellent sounding was achieved with the help of the chorus pedal. Chorus allows guitarist to make the sound more powerful and denser in real time, without involving other gadgets or using a phonogram. It adds richness and deepness to the sound of the пгшефк, and is often used to complement other sound effects. Due to its specific properties, guitarists fell in love with it.

The chorus pedals belong to the modulation pedal family. Having been around since the 1970s, the famous watery, ...
Read full review

The first production of chorus pedals at the Boss factories began in 1976 in the wake of interest in hard rock and the growing demand for guitars. The first model produced at the factory was the CE-1 Chorus. The pedal was massive. Despite the fact that there were no analogs on the market, the pedal was well equipped. CE-1 сhorus effect pedal had three separate controllers: an intensity control and vibrato control, which gives depth and rate control. So it’s kind of having two awesome pedals in one.

As well, Boss CE-1 had inbuilt stereo preamp with the controller. With the help of the stereo preamp, it was possible to adjust the ratio of dry and wet sound of the guitar. Two built-in high quality metal pedals let you switch between vibrato and chorus effects. Each pedal was equipped with an LED indicator that blinked red when the effect was running. Also, the panel had a power button and a knob for switching between high and low frequencies. The vibrato effect sounded good for that time. But the chorus effect sounded amazing. The guitar created a volumetric sound wall and created lush sound.

Just several years after in 1979, CE-1 model underwent a redesign. Shortly after it’s release, the Boss CE-2 Chorus quickly became the most desired guitar gadget, the so-called standard of chorus pedal effects sound for many years. Four decades later, musicians still trust this Boss sound. The manufacturers managed to keep the same sound inside the box three times less than the original. The number of pedals and the number of controllers has been halved. There were only “rate” and “depth” controllers and only one LED indicator left. The pedal was produced in a recognizable blue color. The pedal press mechanism has become more massive and got a rubber pad with the “BOSS” logo.

Boss CE-2W. Samurai among the chorus
For forty years well developed first pedal model CE-1 was so good that “Boss” hesitated to make any changes. But in 2016 new pedal model appeared on the market. The release of the new model was timed to coincide with the fortieth anniversary. In connection with the celebration “BOSS” made a redesign and a number of improvements. The original analogue chorus sound just got better. This is how the Waza Craft CE-2W pedal was born. Boss CE-2W Chorus Waza Craft (which is the original name of the pedal) is a reissue of the original and popular CE-2 analog chorus with BBD chips and a new, modern sounding. The Boss CE-2W scrupulously repeats the fabled CE-2 chorus sounding and adds unreachable depth.

The Boss CE-2W looks a lot like the CE-2. There are also two “rate” and “depth” controllers:

Unlike the CE-2, the Boss CE-2W is equipped with an effect sound mode switch. The switch is located at the center between the “rate” control and the “depth” control. It has three positions. The S position reproduces the sound of the classic CE-2 сhorus pedal . The second position (middle) turns on the stereophonic chorus effect from the Boss CE-1. The far right position includes the vibrato effect from the Boss CE-1. In addition, the CE-2W has a stereo jack output, while the Boss CE-2 did not have one. In total, the Boss CE-2W pedal has one input and two outputs. Weighing in at 4.4 pounds, the Boss CE-2W is very compact, seventy-three inches wide and one hundred twenty-nine inches long. The front of the pedal features the “Boss” logo and “Waza Craft” branding. All Waza Craft pedals are final tested in Japan. The Boss CE-2W requires a power supply or a nine volt battery for work.

The meaning of the Japanese term “Waza” is rather difficult to translate. In simple terms, “Waza” means how great it is to find a balance between skill and art. The Japanese use this word when they want to emphasize the high level of excellence in any endeavor that has been achieved by someone through long training. Long workouts, long trainings and brilliant performances are those things for what the Boss CE-2W pedal was made for.

Boss CE-2W Chorus Waza Craft sounds and looks great. But the most important feature of this guitar pedal is its ease of use combined with a wide range of possibilities. The CE-2W allows the guitarist not to think about the good sound of the сhorus. It is enough to move all controllers to the middle position (at 12 o'clock) and enjoy the deep, balanced сhorus. If you want to experiment - just start rotate the controllers and you'll can get the sound you want. Boss CE-2W Chorus Waza Craft will work for a long time. It will allow you to create a good, dense sound. It will be a great friend for advanced or aspiring guitarists. It will help you find your own sound and is unlikely to lose its relevance in the next 10 years.

How to change guitar strings: tips and tricks